Personal Accounts of the Vietnam War Hit Close to Home

The Conflict that was a War: In Vietnam and at Home by Jim B. Money and 19 Vietnam Veterans 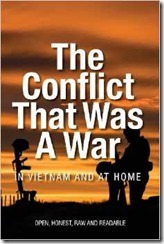 To say that this book has heart is an understatement. Nineteen veterans who served in Vietnam between 1965 and 1972 poured their personal stories on the page to tell those of us who never experienced the Vietnam War what it’s been like to fight it for more than 40 years – first in ‘Nam and then at home. One cannot read this book without being touched by the veterans’ unforgettable tales of devastation and facing unspeakable horrors that few ever experience. Their thoughts, emotions, and insights are laid bare for all of us to read.

Because of the bitter divisiveness and controversy of the war (not a conflict) and the trauma inflicted on those who survived Vietnam and returned home to a frigid reception, their stories too long were untold. No longer. These authors’ unvarnished and frank narratives pull no punches in the faces of the faint of heart, the easily offended, or those who treated the Vietnam veterans with contempt.

Regardless of one’s view of the Vietnam War, these accounts are critical to understanding what really happened and how those involved were affected. One must remember and learn from a war that many wanted to forget so that the past is never repeated. These soldiers’ stories help preserve the legacy of the war, from the Band of Brothers to the Agent Orange and anti-war protests. Whether one agrees with what has been written is not as important as reading the book to understand the fall out of a conflict in Vietnam and at home that, in some ways, is still being fought by those who remain.

The book is written from the unique perspectives of veterans who served in different branches of the U.S. Military across South Vietnam at the height of the war. If you’re the child or descendant of a Vietnam veteran and want to know but are afraid to ask why they won’t or can’t talk about the war, read this book. It may be the closest you’ll get to talking about Vietnam with your own parent or grandparent.

As the son of a Vietnam veteran, I am proud of these veterans for having the courage to share stories that they have held inside for decades. I give this book five (5) stars and highly recommend it to active military, veterans, their families, and anyone interested in the learning more about the Vietnam War.

The Conflict that was a War is now available at:

No Easy Story to Tell

No Easy Day by Mark Owen and Kevin Maurer

Mark Owen’s account of the Navy SEAL raid on a compound in Abbottabad, Pakistan and the killing of Osama bin Laden (OBL) is a powerful, must-read account. In spite of the uproar over whether Owen’s book violated secrecy laws and that trust of the U.S. Government and military, it’s a gem of an autobiography that anyone, from SEAL fans to those who want to know the truth about OBL’s killing should read.

Given the amount of media leakage that occurred following the raid, including revelations of the SEAL’s involvement hours after the attack and identification of the author’s real name in the media, it’s understandable why Owen wanted to set the record straight after watching the media spin fanciful stories of what happened. The uproar against a retired SEAL who legally vetted the text for sensitive information is hypocritical given that no public action has been taken against anyone currently in uniform or serving in the administration who have leaked far more revealing information about the decade-long pursuit of OBL.

I definitely recommend this book and give it high marks — 5 stars. Better the truth from one who was there than the spin provided by the administration, by Hollywood through movies such as the upcoming “Zero Dark Thirty,” or the media’s talking heads. That Owen tried to honor his fellow SEALs who put their lives on the line without the recognition they deserve day in and day out and is donating proceeds from the book to charities that support SEAL families is an added bonus.

No Easy Day is now available at:

A Chilling Account of the Vietnam War on the Ground

The Killing Zone:  My Life in the Vietnam War by Frederick Downs, Jr.

First published in 1984 and updated in 2007, Frederick Downs, Jr.’s personal account as an infantryman in Vietnam during the war is one of the best books ever written about those who saw ground combat in Vietnam. It’s a jarring story of a soldier’s life in the field as told through Downs’ chronicle of his time near the Demilitarized Zone (DMZ) in 1967-68. That his novel is a must-read for West Point cadets is a testament to its accurate portrayal of military combat conditions.

My father served in Vietnam in the same area and time period as Downs. His book taught me a lot about what life in the killing zone was like for my father, who rarely spoke of the war before he passed away. The author writes with such vivid detail and intensity that he drags the reader into his story. At times, I thought I was in the field with him — even though I will never know what men like Downs went through during the war. His book is a tribute to the Vietnam veterans who rightly deserve recognition for their sacrifices. I also appreciated Downs’ efforts to promote reconciliation with the Vietnamese people.

I gave this book 4 stars because it’s not for everyone. Downs tells it like it was. His graphic depictions of the reality of the Vietnam War and derogatory language might leave some readers offended. It should be understood, however, that his narrative portrays the realities of that time period and was not gratuitous. Written as a daily journal, the book does not follow the traditional structure of a novel. The primary conflict in the story — war — does not lend itself to a concise climax or ending.

I highly recommend this book to anyone who wants to read a first-hand account of the Vietnam War or about the life of a soldier in combat. In an age when soldiers are still deployed to far-away battlefields in hostile conditions and face grave danger each and every day, this 45-year-old story is just as relevant today as it was when it happened.

The Killing Zone is now available at: